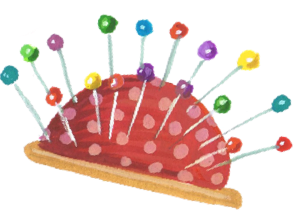 When changing colour, always pull the new colour through on the last part of the stitch before. E.g. If the pattern says, ‘ch20, change to cc, ch1’ you need to use the contrast colour for the last pull through of st20.

With a 9mm hook, dc using 3 strands of Charming held together.

Throughout this pattern work with MC 3 strands of Charming held together and CC Furry Tales.

The looped edge needs to be against the cushion pad and the non looped edge overlaps that by a few inches. Pin the sides together and sew using one strand of MC, whip stitching over the edges. Or if you prefer, crochet the edges together using dc. Make sure you’ve caught all the layers as you do this.

Turn your beautiful Be Kind Cushion Cover the right way out.

Decide where you want to sew your buttons. Sew buttons on and that dah! You’re done!